KRACK has attacked! Discovered by a Belgian cybersecurity Doctoral candidate, Mathy Vanhoef, this attack on WP2 networks is allowing hackers to retrieve personal information from anyone that uses a device linked to a wi-fi network. Ensuring your devices are safe from attack is essential to stopping the spread of your sensitive information. 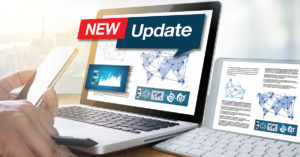 KRACK, short for Key Reinstallation Attacks, is a protocol circumventing attack that hackers are using to get into devices that are using a nearby Wi-Fi network. Luckily, attackers can only attack devices that are within the vicinity of your targeted Wi-Fi network. Since KRACK utilizes Wi-Fi networks, any device that has been using wi-fi can be hacked. For two computers to talk to each other, there is a four-way handshake that is used to authorize access. Both the computers have to be authorized twice to ensure safety and encryption. KRACK masks itself as a previously accepted connection and then links with the other computer.

How do I know if KRACK has attacked me?

KRACK can be recognized merely by looking at the usual web addresses you frequent. The green HTTP:// should have a lock next to the name of the website. The lock means that the site is secure and is encrypted against hackers. If a hacker has been able to disable your WP2 and bypass the four-way handshake protocol, you should immediately stop using the wi-fi network.

How Do I stop KRACK?

Many have asked if changing your Wi-Fi password will stop a hacker. It’s a great idea, but it won’t prevent hackers using the KRACK key. The issuing commands of a hacker using KRACK can’t be stopped with passwords since the route they take is hacked before a password is requested. You must patch your network with updated protection.

Your best option to stop an attack like this is to have an IT business you trust examine your Wi-Fi network, router, and devices. Entré has many unique offers that will keep you protected from this attack and those in the future. Contact us today if you want to stay safe!

Our firm experienced growth in our remote office in Billings, Montana at a level where we no longer could support IT needs remotely.  Entré was recommended to us by other industry professionals in the Billings' area and after working with them for over a year I recommend them as well.  I enjoy working with the Entré technicians and our Montana employees have also had good experiences.  They are very responsive, easy to work with, and provide an excellent service.
Dan Van Soest -Regional IT Manager
Hall & Evans LLC
View More »